Any visitor who happens to pass my way and spend a little time reading may find my musings a little strange, perhaps nonsensical at times but then I find my thoughts wandering off in strange directions at the moment. In truth, I really don’t know why I am writing the blog; except perhaps that it is an attempt to express something so very will-o-the-wisp and intangible that it intrigues me to the point where I cannot put it aside – but then, nor can I properly explain it. How do you express the desire to write?

Although, in general, things have not been going so well of late; one or two of the things that I deem important to me have been progressing and in my confusion I find myself returning to an old subject, one that has formed the basis for a couple of those doodlings of mine that were not just a pathetic attempt at humour.

The subject is the writer Gavin Maxwell, author of, Ring of Bright Water, the story of his stay in the west of Scotland where he lived with his otter Mijbil – Maxwell died in 1969.

He was also a favourite of my ex-wife and once, when the world was younger, we did make an attempt to find Camusfearna, Maxwell’s home and the place where he wrote, Ring of Bright Water. But, my wife was unwilling to trek to the coast from the road, a walk that would have taken about an hour. That spat between us, I now know, was the very early signs of the weaknesses in our relationship that led to our break up years later.

We both admired Maxwell not only as a writer but also as a human being who had the courage to follow a dream, someone with the single-minded dedication to truly pursue a goal. Perhaps we both saw and regretted the fact that we were unable to find any sign of that sort of dedication in each other.

Maxwell was homosexual but his sexuality is only relevant in the context of his relationship with the poet Kathleen Raine who died in 2003. The title of his book ‘Ring of Bright Water’ came from a line of her poetry. He was the great love of her life, a love that was completely unrequited, and in the follow up book to, ROBW, he describes how, when they broke up, she threw her arms around a rowan tree at Camusfearna and cursed him.

She wished, on the rowan, that Gavin would come to be as unhappy at Camusfearna as he had made her.

(I take it as read that you are aware of the importance of the rowan tree in Scottish myth and legend.)

The subject of Maxwell tends to surface in my life from time to time, usually when something in happening or about to happen. The last time was at the beginning of this decade when Kathleen Raine was ailing – and because of that became the subject of a newspaper article that outlined her relationship with Maxwell. 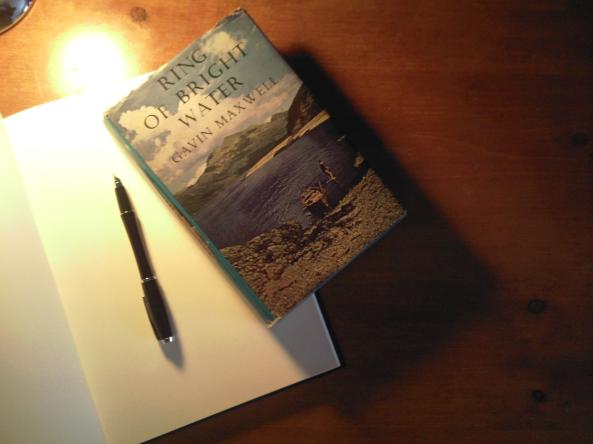 My then agent, a lovely, and very professional, lady called Judith Murdoch was trying to get my first book published (sadly, unsuccessfully) and she, Judith, told me that Maxwell had been the subject of her exams in English Literature at college in South Africa.

I remember that we were sitting in her home near Regents Park in London. It was all very comfortable and the conversation was a long one – I nearly missed my train as a result.

That conversation with Judith came to mind quite recently as I was sitting with laptop in lap, doing some research and at the same time half-heartedly watching a recording of a TV programme that a friend had loaned me. After a load of commercial preamble, the programme proper came on and it was about the Marshes of Southern Iraq and the attempt to regenerate them as a wild life habitat.

Those marshes were one of Maxwell’s passions in life and it was while researching his book about the Marsh Arabs that he acquired Mijbil, the otter that was to play such an important part in his life at Camusfearna.

(In 1956 Maxwell toured the reed marshes of Southern Iraq with explorer Wilfred Thesiger. Maxwell’s account of their trip appears in A Reed Shaken By The Wind, later published under the title People of the Reeds. It was hailed by the New York Times as “near perfect”.)

Above extract from an article in Wikipedia

Sometime during his reign of terror, in an attempt to disperse and displace the quarter of a million Marsh Arabs whom he saw as a threat, Saddam Hussein authorised a multi-million dollar plan to drain the Southern Marshes of Iraq. To do this he built a complex of huge rivers and canals doing enormous damage to a very large and environmentally sensitive area in the process. The Marsh Arabs did indeed disperse but a New York based Iraqi is leading an attempt (financed by the Iraqi government) to restore the Marshes – and the native tribes are drifting back.

If there is one thing that the US-led invasion did achieve, if nothing else, it is the restoration and regeneration of those marshes. Had he been alive, I know Maxwell would have been devastated by their devastation and delighted by their regeneration.

So, at a time when I am trying to make up my mind about something the ghost of Gavin Maxwell once more appears – or am I just being a little foolish? ? ? ? ? ?

P.S below is a link to Kathleen Raine’s obituary printed in the Guardian newspaper – it attempts to explain her relationship with Maxwell – sorry to bore you!